I find that most people(like my parents) that lived in the 1950's still have an unhealthy addiction to America and would never think about moving to another country no matter how bad things get. 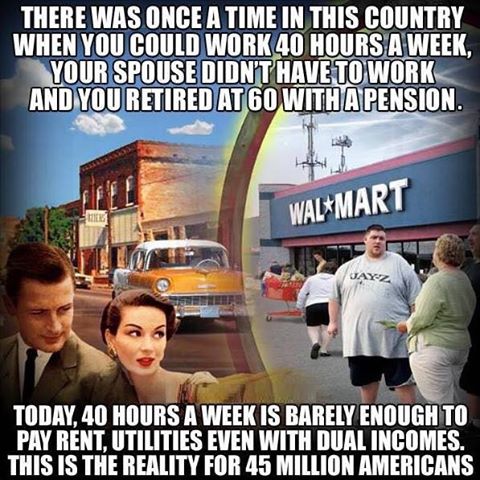 It's not just about economics. Neighbors talked to each other, there were family values, you didn't have to debate stupid issues like gay rights, feminism or tattoos, and TV only had wholesome shows, not amoral degenerate shows.

You guys should see this interesting movie called "Pleasantville" where some teens go back in time through their TV set to the 1950's black and white era, where they thought it was the good old days and golden age. But in reality the world they enter is full of people struggling to find more color in their lives and to experience life and reality more beyond their dull b/w narrow existence. It kind of makes you wonder whether the grass is always greener on the other side, and is a very philosophical film that makes you think and ponder.

"David, single, lonely and not happy with his life, flees reality by watching Pleasantville - a 1950's b&w soap opera, where everything is just that... pleasant. His sister Jennifer, sexually far more active than her brother, gets in a fight with him about a very strange remote control. The remote was given to them just seconds after the TV broke, by an equally strange repair man. They suddenly find themselves in Pleasantville, as Bud and Mary-Sue Parker, completely assimilated and therefore black and white, in clothes a little different and with new parents... pleasant ones. David wants to get out of the situation as well as his sister, but whereas he tries to blend in (effortlessly, with his knowledge), she does whatever she wants to do. One event leads to the other, and suddenly there is a red rose growing in Pleasantville. The more rules are broken, the more colorful life gets in Pleasantville, USA."

[youtube]http://www.youtube.com/watch?v=PJ6QzkIwQu0[/youtube]
Check out my FUN video clips in Russia and Female Encounters of the Foreign Kind video series and Full Russia Trip Videos!

Most of the blame belongs with the American people or should I say sheople, I HEARD a comment on a pod cast and the guy said that a republic such as ours is not a spectator sport and that about sums it up.

Our rulers have been waiting for this for a long time, DAA HERD!

It's really scary how America went from happy and social in 1956 to horribly paranoid in 2016.

In 1956, most people left their cars unlocked, kids played in the park, and neighbors mingled.

In 2016, to Americans, the entire outdoors is all the hood, even open country areas are more dangerous than Baghdad, like every single square foot of the entire outdoors, even including cornfields, forest preserves, etc, are crawling heavily with Latin Kings, Four Corner Hustlers, Gangster Disciples, Mickey Cobras, MS-13, Los Zetas, and every single gang one can think of. Hence playgrounds are empty and falling into ruin and childhood obesity is on the rise.

in 1956, Americans were outdoors a lot and very social.

In 2016, Americans are a strictly indoor peoples, expected to breathe only artificially filtered indoor air, be exposed only to artificial lighting, and no sunlight; in 2016, Americans are paranoid of their own shadows and they flee when nothing is pursuing them. Even the sound of the wind in the trees puts Americans to mad flight as Americans' toxic imaginations turn shadows into phantoms, the sounds of traffic and the wind in the trees into rapists' vans about to abduct them for rape and trafficking, strangers into serial killers, single men into rapists and sex predators, pedestrians into burglars and robbers, bicyclists into stalkers, motorists in residential areas into kidnappers, bags and suitcases into bombs, walking canes and umbrellas into shotguns and assault rifles, cell phones into pistols, and most critically, popping bubble wrap and popping balloons into gun fire. And they trample over each other while fleeing as if fleeing from the gun.
Top
Post Reply
5 posts • Page 1 of 1