How men and women rate each other

How men and women rate each other 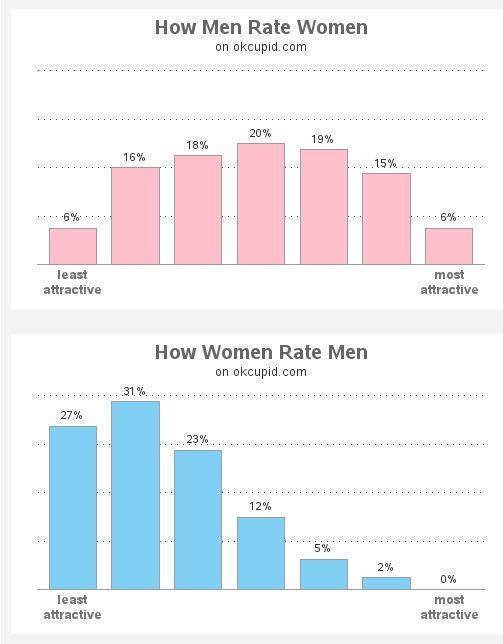 A lot of women tend to be of average or close to average attractiveness (as rated by men). This is what you would expect and is called a normal distribution in statistics.

However, most men are less attractive than average (as rated by women). This is definitely an abnormal distribution.
Top

However, most men are less attractive than average (as rated by women). This is definitely an abnormal distribution.

Nerdy jokes apart, that's the reality of women who have all the choosing power in the West. Come to the Philippines and you'll see a good example of things skewed to our (the men's) favour, to an insane extent.
Top

That now-infamous OKCupid study is real. I saw it myself many years ago when it was on their blog. And then they took it down, probably realizing that it wasn't conducive to increasing revenue.

It's one of numerous evidences that lead to the black-pill conclusion that most women don't like most men.
Last edited by flowerthief00 on November 7th, 2021, 5:36 pm, edited 1 time in total.
Top

I'd be interested to know whether this was the case before the slutification of females. I think I read somewhere that it wasn't.
Final Version Christianity
Top

I think that it was always true. They simply have more choice now than they ever had before. No need to "settle" for the best you can find from among the handful of bachelors in your neighborhood or village.
Top

flowerthief00 wrote: ↑
November 7th, 2021, 5:39 pm
I think that it was always true. They simply have more choice now than they ever had before. No need to "settle" for the handful of bachelors in your neighborhood or village.

My thinking is that it is a little different in that the way resources are allocated under the current regime actually changes who females find attractive. Say the government paid you millions of dollars if you had children with albino dwarves. Men would cynically have sex with female albino dwarves for the money, but females would actually get physically aroused and attracted by male albino dwarves. Since the care of parasitical females is now communised it is only now that females are inclined to indulge in various weird fetishes involving a small percentage of men.
Final Version Christianity
Top

I don't know about that theory, but if you need any more evidence that most women don't like most men (in, really, any sense of the word "like"), here's a list I compiled awhile back:


Sex drive
"Study after study shows that men's sex drives are not only stronger than women's, but much more straightforward."
https://www.webmd.com/sex/features/sex- ... -compare#1


Romanticism
"Other research on gender differences in romantic beliefs has found that men report being more likely to experience “love at first sight”4—one recent survey of 100,000 adults found that 48 percent of men claimed to have fallen in love at first sight, while only 28 percent of women made such a romantic claim.5 In addition, men, compared to women, tended to place a greater emphasis on the importance of feeling passion in their relationships.6 Men have also been found more likely to say “I love you” first in a relationship—and they report greater happiness than women after hearing those words for the first time."
https://www.psychologytoday.com/us/blog ... n-or-women


Opposite-gender friends
"Men were much more attracted to their female friends than vice versa. Men were also more likely than women to think that their opposite-sex friends were attracted to them—a clearly misguided belief. In fact, men’s estimates of how attractive they were to their female friends had virtually nothing to do with how these women actually felt, and almost everything to do with how the men themselves felt..."
https://www.scientificamerican.com/arti ... t-friends/


Online dating
"It seems hard to avoid a basic conclusion: that the majority of women find the majority of men unattractive and not worth engaging with romantically, while the reverse is not true."
https://quillette.com/2019/03/12/attrac ... g-economy/


Paying for things in general
"Despite women’s rising financial strength, a NerdWallet study finds, men are still expected to pay for everything from first dates to monthly bills."
https://www.nerdwallet.com/blog/finance ... s-couples/


Gift-giving
"Who’s spending the most when it comes to gift giving? Unmarried men ages 25–34, according to a composite of studies. In fact, not only are men the bigger spenders when it comes to this, the most romantic holiday of the year, they also do the most gift-giving, with 62% of men expecting to buy a gift for a loved one in 2019, versus only 45% of women."
https://blog.contactpigeon.com/valentin ... tatistics/


Sacrifice
Women are less prone to sacrifice her life (or another woman's life) for the sake of a man.
"Overall, the answers of both female and male respondents suggested that social norms account for greater harming behavior toward a male than a female target"
https://www.sciencedaily.com/releases/2 ... 143955.htm


Hypergamy
"Almost half of all women have a back-up plan in place in the event of separation from their current partner, a study has said, Daily Mail reports....In fact, married women are more likely to have a second option in place as compared to those in a relationship."
https://www.indiatoday.in/lifestyle/wha ... 2019-10-19


Break-ups
"Women are emotionally hit hardest after a break-up – but men suffer more in the long term and may never truly get over it."
https://www.independent.co.uk/life-styl ... 50413.html


Before, during, and after a relationship, and even when the relationship was never about love or sex, mountains of data suggest that women don't like men as much as men like women. And THAT is the real reason that online dating and dating services are a borderline scam.

Surely not all of this is a product of modern-day government or culture.
Last edited by flowerthief00 on November 7th, 2021, 6:15 pm, edited 1 time in total.
Top

^ Obviously we are all aware that females generally are cold and selfish monsters. It goes without saying that they generally hate each other as well as men, but that could be put down to just good taste.
Final Version Christianity
Top

Nice joke but that's not quite what the data is saying. I do believe that most females love their children.
Top

flowerthief00 wrote: ↑
November 7th, 2021, 6:19 pm
Nice joke but that's not quite what the data is saying. I do believe that most females love their children.

What joke? As for their children, or at least those they don't murder because they put them in a better financial position, it would probably miff them of they died and meant the female had to go back to the drawing board in spreading her genes, justifying and income in child support or welfare or whatever and having someone to sponge off in old age, so that sunk cost mentality might approximate a form of love that females are capable of.
Final Version Christianity
Top

Men may rate women higher because using make-up, filters, photoshop, and the ability to choose one perfect angle, they are able to make their picture look attractive when they themselves are not attractive at all. I have seen that before. If you see the woman in real life, she's chunky and not particularly attractive, but if you looked at her picture online, you would think she was fit and attractive.
Top
Post Reply
11 posts • Page 1 of 1