Bao3niang wrote:The Chinese are a pragmatic people, and like to focus on everyday things rather than on artistic and spiritual pursuits. In ancient times, your gateway to success was the imperial examination system, where you could be made a government official if you did well. While quite a few were the bohemian / intellectual type, they were often recuses who detached themselves from society and the culture. China has always seen hard work as a grand virtue, as opposed to personal interests and innate ability / talent.

I think there are 2 reasons for this.

One is communism. Communists specifically set out to destroy culture, religion, artifacts,etc. Now, all the big sites have become modernized and completely commericalized. It costs $25 to see the Terracotta Warriors!!

Second is that China is poor. Most poorer countries worship money. You can see similar dynamics in the Ukraine, Philippines, etc. But at the same time, many other countries seem less greedy. I'll never forget how callous one lady i dealt with was about money-- she simply didn't care about feelings-- just money. Even in other Asian countries people will relent.

The other country you WILL see this however, is Vietnam. They are very money obsessed, but they are even poorer tha China.
Top

Find Your Foreign Sweetheart! Check out our Dating Sites and Overseas Romance Tours!

Bao3niang wrote:The younger generation Chinese/Korean/Japanese girls (all of which I've known) are becoming more and more like US and Canadian girls. I perceive them to be loud, immature, shallow, materialistic, or just simply b*****s if you excuse me for being brutally honest. They have this inflated opinion of themselves that they are the center of the universe, and that they have the right to be spoiled like princesses.

The women I find the most attractive all seem to be at least 25 years of age, because most of the ones younger than that simply cannot match me in intellect. For an update on my article, now many high school girls in China go out and try to seduce rich men.

One time on Chinese TV I saw a mother who took her 18 year old daughter in high school to this millionaire who was holding a grand event to find his future wife. Basically all the candidates had to go through a rigorous series of tests conducted by all sorts of professionals, ranging from measuring height, foot size, shoe size, testing domestic skills, psychological tests, interviews, and a bunch of other stages they had to go through.

When I saw that particular mother and daughter, I was like: "Whoa! The mom has lost her mind!" Her daughter hesitated and I could tell she was forced to go. When the news reporter asked the mom why she wanted to marry her daughter to a man she never even met (and at such a young age), the mother replied: "Sooner or later she is gonna go on this path", by which she meant marrying someone rich.

There is a degree of truth to this-- but you are seeing this to a much greater degree in Beijing or other major cities.

Still, i met a girl from Shanghai even, who was very sweet, didn't seem arrogant or biased on looks (was nice to nerdy girls and guys and was attractive)

As a foreign Asian or foreigner, you have a big leg up-- it's very noticeable. Chinese women will be very sweet or at least somewhat curious. Perhaps their attitude would change very quickly if you were a 38 year old farmer from Anhui or Henan.

However-- it can be much harder in a place like Beijing-- but if you get into an inner circle or meet someone at work through friends they seem friendly enough.

I also noticed how affectionate couples and women were on the subway or in public places.

Go out to a more minor city, and people are much friendlier.
Top

Well, a lot of people who are in very developed countries (America, Canada, UK, SK, etc.) are still materialistic as heck. Again, it is this workaholic culture where people get a sense of social belonging by working their asses off because they have this void in their lives from a lack of real interests/hobbies. They may enjoy themselves every once in a while, but never really try to cultivate their individuality.

You mentioned that China is poor, that's not completely true. If you look at the major cities like Beijing, Shanghai, and Chongqing, they are very developed and westernized. The people in those cities are very well off. Vietnam is also rapidly developing.
CYKA BLYAT!!!!!!
Top

My opinions in China would be considered naive by many, and I've heard people tell me things like "you are too young and too naive to understand." The typical East Asian/American mentality is too brutal. I'm really saying all of what I've written in this post for greater benefit, because I've realized (or at least try to) the causes behind some of these problems. Considering that 95% of the world are conformists with no brains, I really woudln't care if I got heavily criticized by posting this essay elsewhere.
CYKA BLYAT!!!!!!
Top

Bao3niang wrote:Well, a lot of people who are in very developed countries (America, Canada, UK, SK, etc.) are still materialistic as heck. Again, it is this workaholic culture where people get a sense of social belonging by working their asses off because they have this void in their lives from a lack of real interests/hobbies. They may enjoy themselves every once in a while, but never really try to cultivate their individuality.

You mentioned that China is poor, that's not completely true. If you look at the major cities like Beijing, Shanghai, and Chongqing, they are very developed and westernized. The people in those cities are very well off. Vietnam is also rapidly developing.

China has good infrastructure, but it is hardly rich. Of course, there are some people who have a lot of money, but that doesn't make a country rich. I went to a small town in Sichuan and boy was it poor there. Many people living on $100-$200 a month.

Beijing, Shanghai and Shenzhen are on a different level-- but leave these 3 places and it is a different story.


Although you can see materialism in the US, it is on a different level

for example you will not see:
1. women marrying nerdy, ugly guys for having a good job (prevalent in China)
2. people buying something just because of a brand name so they can show off (prevalent in Russia)
3. people who will buy something because it's more expensive-- other people can't afford it (prevalent in Brazil)
4. people who charge rich people higher prices (many poor countries)
5. being concerned about money to the exclusion of almost everything else (chinese girl who say that she'd rather cry with a rich guy who makes her unhappy than a poor guy that makes her happy)
Top

Bao3niang wrote:I think one of the major reasons Chinese choose US/Canada/UK is because those countries share materialistic and workaholic values. Also, it is because much of China's exposure to Western media/culture comes from the US/Canada/UK. I hardly see any Chinese person immigrating to Europe (with the exception of the UK). Does anyone know why? 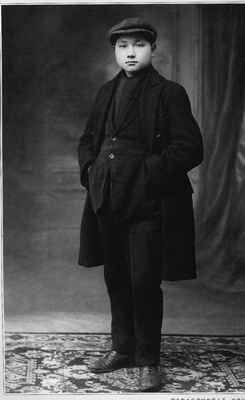 I think Zhu De studied in the Soviet Union (or was it Germany?)

And Bao3niang, thanks for all your threads. I've seen many of them, really enjoyed them, but haven't had enough time to reply as much as I'd like. I very much agree with you on many aspects of Sinospheric culture as very insular and narrow-minded.

The historical reasons for those are millenia-old, and go back to the Chinese belief that if the center (political, ideological, cultural, or otherwise) is strong, then everyone is safe. If not, then chaos descends. Chinese history repeats this lesson over and over again, and thus you can see why conformity is built so strongly into the Chinese psyche. When the Han, Tang, and Song dynasties were controlled by powerful emperors, Chinese culture flourished. When warlords took over as during the Three Kingdoms period and the 1930's, China went to ruins. And for millenia, those who would dare be different were summarily executed. Freethinking genes were simply not permitted.

This is part of the reason why (other than economic domination), when Chinese move into other countries and cultures, anti-Chinese sentiment often occurs. Winston's observations of the negative traits of the [North]East Asian, and particularly Chinese, mentality are very well-known stereotypes in Southeast Asia, such as in Malaysia, Indonesia, and Burma.

From my personal experience, Mainland China is by far the most conformist and least free-thinking of all Asian countries. Even Taiwan is more open-minded. Thailand and the Philippines may have been bombarded by soap operas, trashy media, and poor-quality education, but even they seem to be much more open-minded, since traders and foreigners had been welcomed in Southeast Asia for millenia as opposed to China.
Catalogue of Falcon's threads and posts
Top

I kind of like the British approach to politics. The anti-Europe party won the Euro elections yet *nobody* on my Facebook has admitted voting for them. Well we'll just muddle through it without needing a coup.

There were poor people in China - I lived in one of the poorest parts of Guangzhou. But as a foreigner you're a lot less likely to mix with the poorest people there. I only dated middle class women in China, but I dated poorer women in Thailand.

There are loads of Chinese in the UK. The older ones usually run restaurants. I see a lot of Chinese women on the way to work in the morning - usually they're waiting for the London bound train to go to their jobs as management consultants or accountants.
I quit my boring cubicle slave job and now I'm Happier Abroad...
Do YOU want to date beautiful foreign women? Find out which country's women are best for you, and which dating site to look for them on!
Love Chinese girls? Read my complete guide to Chinese dating.
Top

At this point, I seriously don't give a shit anymore. My parents still act like FOBs even though they've been living here for well over 25 years. Even if they do put me through an arranged marriage back in China, I just take whatever comes to me and work with it the best I can. But I've noticed as they get older, they seem to have mellowed out their previously rather extremist views.

I mean, there are positives and negatives to every culture, so I wouldn't want to narrowly generalize each one.
Top

I generally find a lot that would admit to and agree about, but I would rather endure constant shit being thrown at me as opposed to how I see most American families end up (divorce, single mothers, broken families, etc). I'd ignore them and not give a shit. But when they stop complaining, is when I really know that they aren't going to give a shit. It's an incredibly f***ed up way of thinking, but I can see why. Marriage is just a social construct at its very start, there is nothing romantic about it. I'd wish I would never have to get married, because marriage is such a scam since its very beginning. Anyone who thinks marriage is some kind of happy affair is a deluded romantic or someone who wants to push the scam.

Marriage is always seen as a strategic alliance even though my parents seem like they married for love. Especially when you're the only male child in the family, and especially the only male born in the family's generation, prepare to suffer an avalanche of bullshit and expectations thrown at you.

My problem is just with modern western culture and how corrupt it is in comparison.
Top
Post Reply
26 posts